Researchers have found a new approach for zeolite synthesis.

Researchers from the Department of Physical and Macromolecular Chemistry (Valeryia Kasneryk, Mariya Shamzhy, Qiudi Yue, Michal Mazur, Russell E. Morris, Jiří Čejka and Maksym Opanasenko), in collaboration with colleagues from the University of Science and Technology of China and ShanghaiTech University developed a new synthesis strategy for transformation of “openwork” zeolites into materials with new topologies at room temperature. This breakthrough discovery provides a way forward towards engineering nanoporous materials and increasing the number of zeolites available for future applications.

Zeolites are crystalline porous materials used in gas separation and catalysis. Although millions of thermodynamically stable structures have been predicted, until now, the zeolite community has only recognized approximately 250 different zeolite topologies. Such discrepancy between the numbers of proposed zeolite topologies and those prepared via traditional hydrothermal approaches has prompted the development of alternative strategies for zeolite synthesis, in particular ADOR (Assembly-Disassembly-Organization-Reassembly). ADOR is a unique approach because the topology of new zeolites can be easily predicted based on the parent structure. However, attempts to transform fragile structures (for example, zeolite of IWW structural type) using this approach have been unsuccessful thus far. Yet, these researchers from the Department of Physical and Macromolecular Chemistry developed a straightforward strategy to construct new zeolites through non-contact vapour-phase-transport rearrangement. This method offers the opportunity to prepare new zeolite topologies otherwise inaccessible by both hydrothermal and conventional ADOR synthesis routes. In addition, combining in situ diffraction and X-ray absorption spectroscopy makes it possible to follow the mechanism of the rearrangement process and to describe intermediate structures. The successful application of vapour-phase-transport rearrangement to zeolites of different topologies highlights therefore the potential of this technique for 3D-to-3D transformations of crystalline materials with labile frameworks collapsing upon contact with the solvent. Moreover, in combination with other methods for post-synthesis alteration of 3D frameworks, this approach enables the manipulation of the structures of anisotropically labile materials. 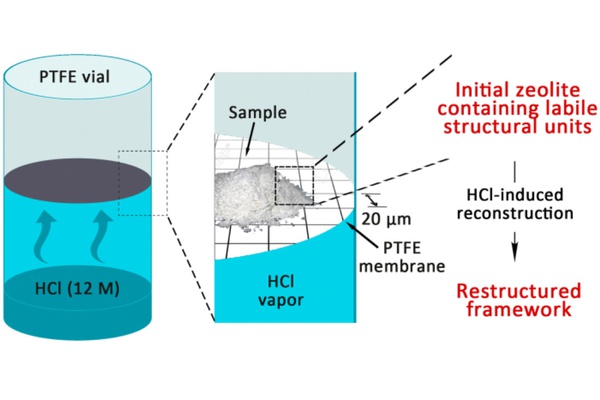